The Seagate Expansion External Drive is an excellent USB hard drive enclosure for digital entertainment centers. It has no power button, but sleeps after inactivity and automatically turns off when your computer is shut down. It's sleek black case really blends with other black entertainment center components.

I have the 1.5 TB version of the Seagate Expansion External Drive. After taking the enclosure apart, I found a Seagate Barracuda LP (ST31500541AS) 1.5 TB hard drive inside. After checking the specs on Seagate's web site, I realized that it is only a 5900 RPM drive.

Luckily I have a 7200 RPM Seagate drive on hand. I swapped the faster drive into the USB enclosure and the lagging problem went away. The 5900 RPM drive is fine for backups, but for real-time play-back of video it just doesn't cut it.

A photo of the Seagate 1.5TB Expansion Hard Drive: 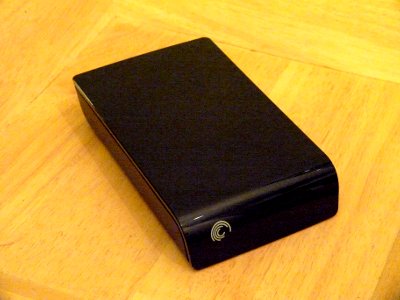 One more thing... The Seagate Expansion Enclosure does has a laptop lock hole, which is not available on many hard drive enclosures on the market.

You're partially correct in assuming that a 5400rpm drive is slower than a 7200rpm drive, all things being equal, but I can assure you a normal 5400rpm drive is more than capable of handling HD content. What is likely happening is drive "stutter" from over aggressive power management. It's VERY common with high capacity drives that manufactures assume will be used sporadically for large file backup. WD Green drives are also notorious along with the Seagates which are now receiving firmware tweaks for more "normal" use.

Mr Donaldson is correct, any 5400 RPM HDD made in the last decade is multiple times faster than needed for video playback. In fact USB2 is far more of a bottleneck than the read speed. It was power management, maybe changeable with their utility.

FYI I do own one of the Expansions and it does the same thing playing back video over my lan from a NAS. It would always freeze my video player around the 10 minute mark but it took a while to realize it was always the same amount of time and compare that no other USB connected HDD was doing it. In a way it's absurd that any would be set up to go to sleep when it's been mere seconds since the last I/O.

Did your message disappear? Read the Forums FAQ.

TrackBack only accepted from WebSite-X Suite web sites. Do not submit TrackBacks from other sites.